About 6 months ago I posted a post about pornography. I’ve had several more thoughts on it since then. (here’s the link to my previous post)

One thought, I was recently reading several articles and essays on several serial killerss while researching a post about fathers and their importance (which is still coming) One of the biggest problems that affected serial killers was the lack of fathers and over domineering mothers, but that’s for later. Another problem for several of them is that they would start out with pornography and eventually work down to raping and murdering.

But when 50% plus of marriages are ending in divorce and 95%+ of people have committed fornication you can see how our culture are becoming very immoral. Certainly pornography is not the only problem, and maybe it’s not even the worst one. But I believe it’s still important. Especially to young men.

To some extent you will destroy yourself when you look at pornography.

Matthew 5:28 – But I say to you that everyone who looks at a woman with lustful intent has already committed adultery with her in his heart.

It’s a serious thing. Adultery is a capital crime in the law. Maybe you aren’t committing the act. But each step that way is still a sin.

1 Corinthians 6:18-20 – Flee from sexual immorality. Every other sin a person commits is outside the body, but the sexually immoral person sins against his own body. Or do you not know that your body is a temple of the Holy Spirit within you, whom you have from God? You are not your own, for you were bought with a price. So glorify God in your body.

Just remember that we are here to glorify God.

And don’t forget. God is faithful. He will deliver you. But you must endure.

1 Corinthians 10:13 – No temptation has overtaken you that is not common to man. God is faithful, and he will not let you be tempted beyond your ability, but with the temptation he will also provide the way of escape, that you may be able to endure it.

Picture of the day: 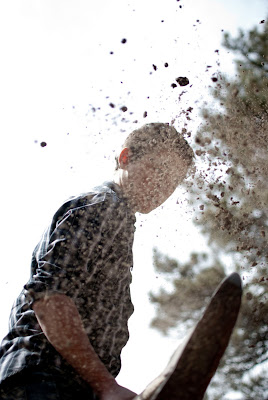 Another note, addressing the addictive nature of pornography- where is it that Paul says he will allow no thing to have mastery over him? We should be intoxicated with The Spirit- and maybe with the love of our wife (which neither you nor I have yet, Daniel :-D), as in Pr. 5- but not with wine, or drugs, or pornography, etc.